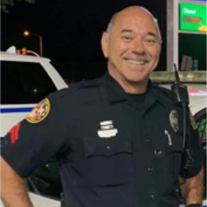 Robert “Mac” McKeithen, 58, of Biloxi, MS passed away Sunday, May 5, 2019 in Biloxi. Robert was born in Jackson, MS on March 22, 1961 and was a graduate of the University of Mississippi. He served in the U.S. Air Force, retiring as a Tech Sergeant and received many medals, including the Air Force Commendation Medal, the Meritorious Service Medal and the Air Force Achievement Medal. Robert served in the Biloxi Police Department for 24 years, where he served his community and earned the Medal of Valor for his efforts during Hurricane Katrina. He also worked security for Dillard’s. Robert enjoyed spending time with his family. He was preceded in death by his parents, Charles and Joan McKeithen; and his brother, Charles McKeithen. Robert’s survivors include his wife, Pamela McKeithen; his children, Amy McKeithen, Levi (Natalie) Grundel, Logan (Lillian) Grundel and Lauren Grundel; his grandchildren, Delmas Cox, Jr. and Kaiden Grundel; his sisters, Melissa McKeithen and Kathryn Martin; and his brother, William McKeithen. In lieu of flowers the family prefers donations be made in Robert’s memory to Southern Coast Credit Union to be distributed to charities in Robert’s name. The family wishes to express a special thanks to all who loved Robert, the Biloxi Police Department, all the law enforcement officers and agencies that worked so tirelessly, Bradford-O’Keefe Funeral Home and the staff at Merit Health Hospital. Funeral Services will be held at First Baptist Church Biloxi on Monday, May 13, 2019 at 12:30 pm. Friends may visit from 9:30 am until service time. Interment will follow at Biloxi National Cemetery. The Howard Avenue Chapel of Bradford-O’Keefe Funeral Home is in charge of arrangements.
To order memorial trees or send flowers to the family in memory of Robert "Mac" McKeithen, please visit our flower store.
Send a Sympathy Card