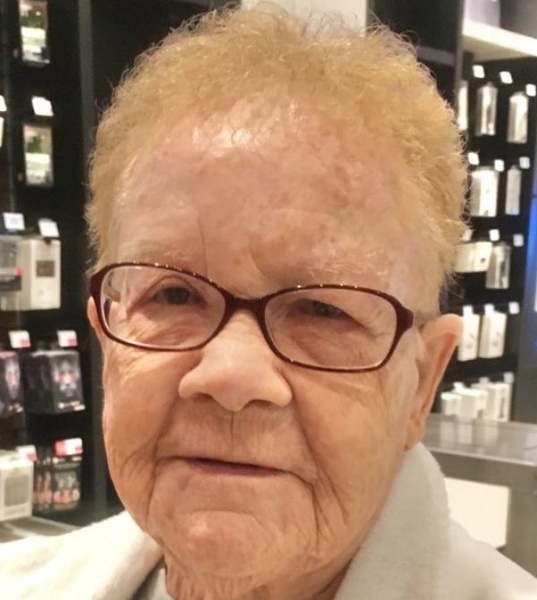 The Nugent and Propst families invite you to join us on Wednesday, 26 January, 2022, from 11:00 am until 12:00 pm with a 12:00 pm funeral service at the Bradford-O’Keefe Funeral Home, 675 Howard Avenue, Biloxi, Mississippi, for a celebration of the life of our beloved Ann Elizabeth Propst Nugent, who passed into the Lord’s Hands on 19 January, 2022. Interment will follow at Biloxi National Cemetery.

She married the love of her life, Alfred Nugent, on November 8, 1958, who preceded her in death in 1999. Ann and Alfred moved to Biloxi when Alfred was stationed at KAFB. They reared their three children in d’Iberville, MS and we rejoice now knowing how gloriously happy Ann and Alfred’s reunion must be!

Ann treasured her children and embraced every moment with them. She particularly loved her role as “Meme” to her grands and great-grands. She had an engaging personality, and always made people laugh; especially at her weekly beauty salon appointments. While Ann’s hair was fiery red, her favorite color was pink throughout her long and meaningful life.

She loved to read romance novels – especially those with a time travel slant such as the “Outlander Series” – into which she was introduced by her globetrotting and inquisitive daughter, Lorrie. She also greatly enjoyed country music, especially Merle Haggard, an interest she shared with daughter Debra. And like her daughter Rose, Ann’s Christian faith remained strong her entire life and we are grateful her values of love, acceptance and compassion have been conveyed throughout her family.

Ann dearly enjoyed traveling with family, and her motto was the more loved ones, the better. She actually started her dialysis just shortly after a junket to Disney World in Florida; making a smooth transition from partying to therapy in 2013.

Ann’s long life was marked by hard work. As a young woman, Ann worked in the cotton mills in North Carolina and would break the weaving machines on purpose in protest of the long work hours. She worked at the Army Air Force Exchange service for over 25 years. After retirement Ann and Alfred built their retirement home in Pass Christian Mississippi where she resided until her death.

Ann is survived by daughters Debra Darnell of d’Iberville MS, Rose (Jacob) Vicknair of Carriere MS, and Lorrie (Henry) Muse of Dallas TX; and her beloved sister Jeannette Jarett Morganton NC. She was preceded in death by her brother Bobby Propst. Ann’s grand-children are Katrina Gordon and Katelyn (Brock) Jackson. Ann’s survivors include her great grandchildren Jaxson Gordon, Alexus Jackson, and Brysen Jackson, as well as her many nieces and nephews.

Ann leaves behind beloved sister-in-law Boycie Carter, and her forever-best-friend Ginger Bauers. Ann’s final years were enriched from dear family friend Tami Wulfekuhl, who provided her companionship during, and transportation to her many medical appointments, whom the Nugent family thanks wholeheartedly. We also extend a heartfelt thanks for the KAFB Nephrology Clinic, who provided her attentive and nurturing care for eight and a half years.


“And the stately ships go on to their haven under the hill; But O for the touch of a vanished hand, and the sound of a voice that is still! Break, break, break, at the foot of thy crags, O sea! But the tender grace of a day that is dead will never come back to me.” Alfred Lord Tennyson

To order memorial trees or send flowers to the family in memory of Ann Elizabeth Propst Nugent, please visit our flower store.