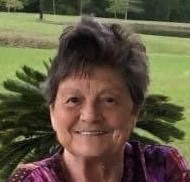 Betty was born in Biloxi, MS on December 13, 1939.  She graduated from Sacred Heart Catholic Girls School.  She was a former member of the Ladies Auxiliary of the Slavonian Lodge in Biloxi.  Her hobby was gardening.

She was preceded in death by her parents, Peter Jurich and Marie Barhonovich Jurich; her spouse Dennis Anthony Meyers, Jr. and a grandson Jacob Meyers.

Memorial donations may be made to St. Jude Children’s Hospital.  The family would like to thank the ICU staff at Memorial Hospital and friends Barbara Parks and Felicia Brown.

To order memorial trees or send flowers to the family in memory of Betty Jurich Meyers, please visit our flower store.