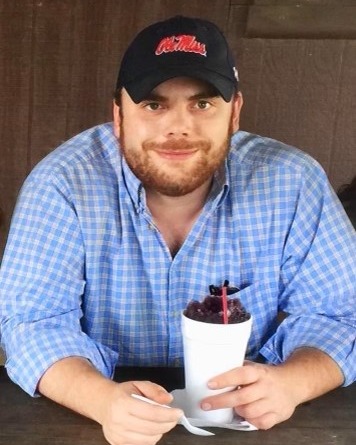 David began working for the Mississippi Public Service Commission in September 2012. David’s role at the commission was Special Counsel to the Commission for Federal Energy Affairs.  He represented the rate payers of Mississippi and was very highly regarded by his peers all over the country.

David will be sadly missed by his parents: Nelson Wayne Carr with his wife Vicky Carr.  David will also be missed by his grandparents: Melba Welch Wyatt, Paul Nelson Burpo and Carol Burpo, as well as his loving sisters, Katherine Elizabeth Carr (Jacob Saucier) and Rebecca Allison Carr; and his niece Rosemary Carr Saucier, and nephew Jesse Oliver Carr Saucer.  He will also be fondly remembered by his many aunts, uncles, cousins, friends and colleagues.

David had many passions and shared his many gifts with his friends and family.  Every special occasion David offered to grill up some meat or bake a pie or whatever new recipe he wanted to try, and it was beyond a doubt the best thing on the table.  His fondest memories were cooking up the food for the tent in The Grove before the Rebels took the field.  David liked the finer things in life, he also loved all things Ole Miss, deep philosophical discussions with his friends Zack, Ben and Anatole, and playing fetch with Cooper the Magnificent, his very loyal companion.

Services will be held at Bradford O’Keefe Funeral Homes on O’Neal Road at 11:00 a.m., Tuesday, January 3rd, 2023.  Friends may visit one hour prior.  Interment will follow at Finley Cemetery on Hwy 53.  The celebration of life will continue at David’s parents home in Gulfport.

To order memorial trees or send flowers to the family in memory of David Nelson Carr, please visit our flower store.