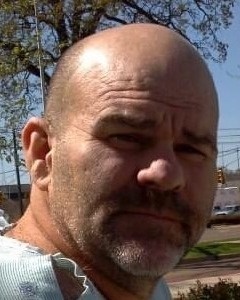 Don “Donnie” James Chapman was born to the late Elnora and James Chapman in Hutchinson, Kansas on November 27th, 1964. He unexpectedly passed away on September 14th at 1:10am due to a long-standing vascular illness. He is survived by his dearly beloved wife, Wendy Perkett, daughter, Ashley Wade and son, Justin Wade.

Donnie did not hesitate to expand his family and constantly brought aboard new members. His selfless love for others welcomed Ashley’s wife Meghan and her children, and Justin’s best friend Heather and her son HJ to his life. Donnie was the staple for his family and wanted nothing more than to please them.

Through these troubled times and detrimental health conditions, Donnie fought to the very end. Donnie was a man to be reckoned with, believing in nothing more than to take care of his family while deeply loving his wife. And although they were not his biological children, Donnie stepped in and raised two rambunctious children as his own, with no questions asked. He was truly a man to emulate.

Donnie, we could not have done this without you and want to give you our gratitude for the past 20 years. You will truly be missed and will never be forgotten.

Donnie’s service will be held at Bradford O’ Keefe Funeral Home, 15452 O’Neal Road, Gulfport, on Wednesday, September 21st at 2:00 pm.  Friends may visit one hour prior to the service. Please come by to pay your respects as we say farewell to a loving husband, father and family man.

To order memorial trees or send flowers to the family in memory of Don James Chapman, please visit our flower store.