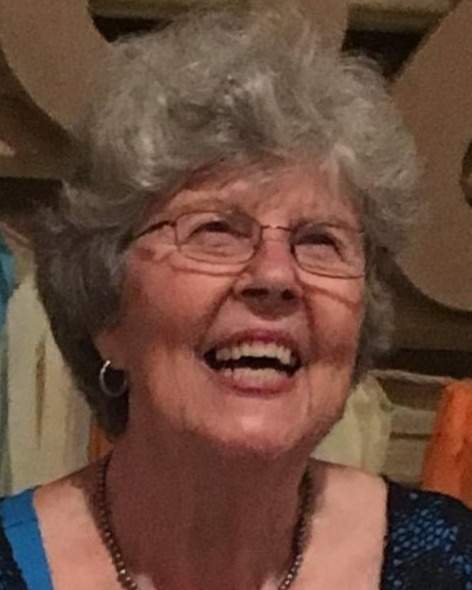 Libby Atkinson McQuillan of Biloxi, age 88, passed away peacefully on August 26, 2022, in Gulfport at her residence at the Summerfield Assisted Living. Though she was born in Gulfport, MS, Libby was a true Biloxi girl, raised off Atkinson Road on the family property on Back Bay and graduating from Biloxi High School where she served as class presidents, and “Most likely to Succeed”. She was smart, a beauty, and talented, loving anything to do with the water, sailing, fishing, and throwing the perfect silver dollar cast net. She used the beautiful landscapes she was surrounded by in Biloxi as her inspiration for her watercolors.  She also drew and painted her cherished greeting cards for special occasions, full of her humor and talent, for her children and grandchildren. Libby applied and was accepted at Parson’s School of Design in New York City after her graduation from high school but choose to marry and raise her 3 daughters instead. Her husband’s military career took them to many cities but she returned to her home, on the bay, off Atkinson to raise her three daughters. Years after her divorce and working at the Biloxi Chamber of Commerce, Libby met an advertising executive from New York City that was filming a commercial on the Coast for B.C. Powder. She and Bill married, combined families and opened McQuillan and Breckenridge Advertising with their business partner and Art Director, Daryl Breckenridge, in Biloxi in the Old Spanish House.  After Bill’s retirement, she and Bill moved to New York City where Libby was employed by the Phycology Department at New York University. After a few years of her living in and loving the Greenwich Village, she once again returned to her home. She and Bill had purchased a sailboat on the east coast and sailed it back to the Mississippi coast with plans to sail around the world. Bill became ill shortly afterwards so their dream was left a dream, but they spent most weekends sailing the Gulf and enjoying their boat. Always a person of service, Libby volunteered for many years as a Crisis Counselor for the Suicide Hotline. Libby became certified as a Social Worker later in her life and worked up to her retirement as the Ombudsman for the three coastal counties of Mississippi. Not long after her retirement and with destruction from Hurricane Katrina to the coast she so loved, she moved to Milton, FL. There she joined the Santa Rosa County Democrats, worked tirelessly as a volunteer and served as a State Delegate.  She made many long, last friends through her work there. Libby was a “Scrabble” challenger and though she won frequently, she was more delighted when her opponents used an interesting, unusual words.  That gave her joy over triumph!  After a few years, Libby returned once again to Biloxi where she enjoyed her family, and telling all the stories of her past, sprinkled with her quick humor and storytelling skills. She believed in living a life of family, service and working one’s life passions and instilled this into her children and grandchildren. Her family truly feels she encapsulated the characteristics she valued as a woman.

Libby is preceded in death by her husband, William “Bill” McQuillan who she lovingly took care of in his last years; her parents, Julia Austin Atkinson and Thomas Atkinson, Sr.; her brother, Tom Atkinson, Jr.; her grandson, Nicholas Matthew Mazara; as well as many of her beloved pets.

Services will be held at Bradford O’Keefe Funeral Home on Howard Ave., Biloxi, Friday, September 16, 2022.  Public visitation will be from 5:00-6:00pm with the service held at 6:00pm. In lieu of flowers, a donation to Gulf Coast Mental Health will be appreciated.

Bradford-O'Keefe Funeral Home is honored to serve the family of Libby Atkinson McQuillan.

To order memorial trees or send flowers to the family in memory of Elizabeth "Libby" Atkinson McQuillan, please visit our flower store.