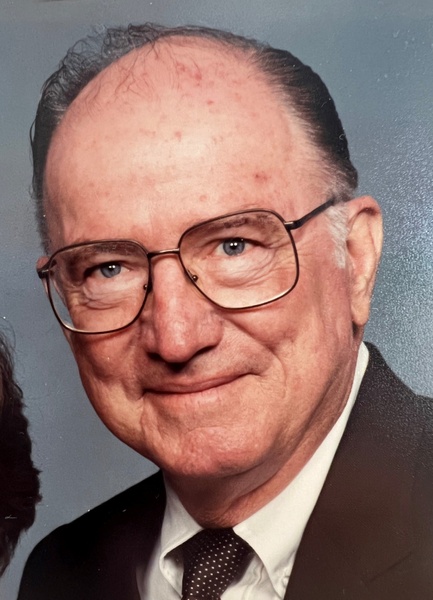 John was born and grew up in Biloxi, MS. He recalled his childhood with such fondness, he wrote and published a book about it called “Squirt Blossom Jubilation”. He graduated from Notre Dame High School in 1948 and the University of Southern Mississippi in 1952.

John was a veteran of the Korean Conflict serving in the U.S Navy from 1952-1955. He was assigned to the Destroyer NK Perry where he achieved the rank of Quartermaster Petty Officer 3rd Class.

John was married for 60 years to his beloved wife, Armella, “Melsie”. He was devoted to his family, both immediate and extended. He hosted many a back yard barbecue and some seriously competitive croquet games, along with many excursions to and cookouts on Deer Island for the family.

John worked for Crawford and Company Insurance Adjusters for 35 years, beginning his career in Mobile, AL. He managed the Biloxi office for 25 years.

A man of strong faith, John was a member of St. Alphonsus Catholic Church for 55 years and served as Parish Council President. He was a long-time member and past president of the Biloxi Lyons Club and was awarded the Melvin Jones Fellow for Dedicated Humanitarian Services from the International Foundation. John was past president of the Treasure Oaks Country Club and was instrumental in its expansion over many years.

John was an avid fisherman and beloved story teller, but his main passion was tennis. He helped take the Southern Miss Tennis Team to two state championships. He won tennis tournaments from Mobile to New Orleans and gave many an informal lesson. He was instrumental in establishing the Mobile, AL Municipal Tennis Courts which are now some of the largest municipal tennis courts in the country. John also had a wonderful group of poker buddies for 40 years.

Many special thanks to Beth Gilmartin Blake for her guidance, expertise and love and to Dorothy Dunning and the Saads Home Health Care Team for their excellence and care. And also, a special thanks to Natasha, Deidra and Rashida at Kare Med.

In Lieu of flowers, the family asks that donations be made to Lorena Bessey Mangin Scholarship, USM Foundation, 118 College Dr. #5210, Hattiesburg, MS 39406.

Bradford-O’Keefe Funeral Home is honored to serve the family of John Mangin.

To order memorial trees or send flowers to the family in memory of John Mangin, please visit our flower store.