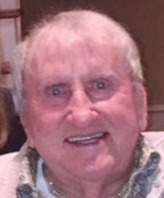 Joseph Anthony Jelusich of Biloxi, MS was called home to Heaven by his Lord and Savior Jesus Christ on August 10, 2022, at the age of 89. Known to many as Joe or JJ, he was born July 2nd, 1933, to Anthony “Brother” Jelusich and Bertha Conovich. The only brother to sisters Mary Elaine, Theresa, and Ann.

Growing up on the coast as a young man he enjoyed many traditions and events unique to the south. Particularly Mardi Gras Balls and The Blessing of the Fleet.

JJ graduated from Notre Dame High School in 1951, where his favorite subjects were math and history. He was in the school band and participated in several school clubs.

Joe served in the United States Navy from 1954-1956. His time in the navy piqued his interest in world travel, where he loved to experience different cultures. He learned many greetings and phrases in various languages and enjoyed talking to others from different backgrounds. He had an outgoing and comfortable manner, which enabled him to be a friend to anyone he met.

After the Navy, Joe returned home and married Sharon Marie Diaz and they were blessed with their daughter, Andrea, who was born in 1961. He apprenticed to get an electricians license and became a member of the International Brotherhood of Electrical Workers, local union 903.   While there, he earned a Master level certification. He was a 57-year member of the union. “Diamond Joe” as he was known to co-workers, embraced the opportunity to work in such places as Saudi Arabia, Riyadh’s airport, Trump Tower in New York City as well as the Louisiana Superdome.

He loved attending Broadway shows and enjoyed operatic music, and oftentimes went to sleep while listening to his favorites.

In 2009, Joseph relocated to Houston, TX to be nearer to his daughter Andrea, whom he loved and cherished.

Joe was preceded in death by his parents, Anthony and Bertha and sisters Mary Elaine Nedderson, Theresa Baricev and Ann Newman.

We will miss his big striking blue-green eyes, unbelievable memory, and heart of gold. “Grandpa J” loved to give gifts, which was his love language. We are thankful for the time spent together. Because he never liked to say goodbye, he would simply say, “See you soon.”

A graveside service will be held Friday, September 16, 2022, at 12 o’clock noon in The Old Biloxi Cemetery on Irish Hill Drive.  Family and friends are welcome to come celebrate his life.

“Do not let your hearts be troubled. Trust in God; trust also in Me. My Father’s house has many rooms; If that were not so, then I would have told you. And when I go and prepare a place for you, I will come back and take you to be with Me that you also may be where I am. You know the way to the place where I am going.”

Bradford-O’Keefe Funeral Home is honored to serve the Jelusich family.

To order memorial trees or send flowers to the family in memory of Joseph Anthony Jelusich, please visit our flower store.