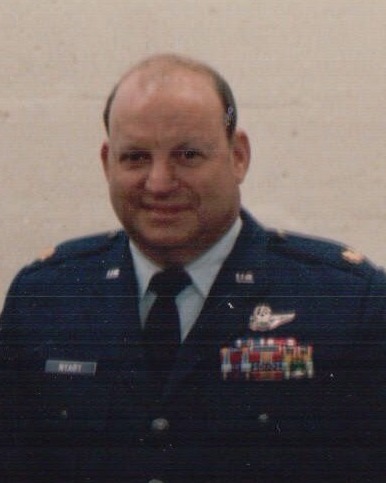 He was born on December 26, 1941, in Miami, Florida to Jack and Sarah Nyary.  He graduated from South Dade High School in Homestead, Florida, and received his Bachelor of Arts degree in Mathematics from the University of Florida in Gainesville in 1965. While at the university, he was a member of the Phi Gama Delta fraternity. Upon graduation, he was commissioned as a 2nd Lt in the US Air Force.  During the first 16 years of his military career, he was a fighter pilot, having served two tours of duty to Vietnam. Due to medical complications, he was no longer able to fly as a fighter pilot and was transferred to Keesler AFB, Biloxi, MS, to the 7th Airborne Command and Control Squadron (7ACCS). Norm retired as a Major from the Air Force in 1989.

After retirement, he was employed with the Isle of Capri as Transportation Manager and worked in the electronics dept at Walmart, and completed his second retirement employed with the Biloxi Public Schools as a substitute and computer programming teacher. When computer programming was no longer offered, he worked as a records clerk at Biloxi High School.

Norm was a devout Catholic and a member of Our Lady of Fatima Catholic Church and the Knights of Columbus #9409 in Biloxi. He served as a Eucharistic Minister and played trumpet with the choir.  He felt his love of music was a way in which to serve the Lord.  He was also a member of the Gulf Coast Wind Ensemble. Music had been a part of his life since high school.  He served as drum major in his high school band. Also, his love of music came from his father and grandfather.  His father played the violin and his grandfather was an accomplished musician on the cymbalom and had once performed for the Crown Prince of Hungary.

He also had a great love of fast cars.  His teen years were during the days of hod rods and rock and roll. His favorite car he owned was his 1980 Pontiac Trans Am (Smoky and the Bandit edition) which was destroyed during Hurricane Katrina.

In addition to his love of his family, music, and cars, he loved fishing, genealogy, and traveling, especially cruising.

He was preceded in death by his father, Jack Nyary, and mother, Sarah Harden Nyary Drouin; Linda Lee Bell Nyary, his first wife and mother of his two oldest sons.

Funeral services will be held Wednesday, November 23, 2022, at Our Lady of Fatima Catholic Church, 2090 Pass Road, Biloxi, MS.  Visitation will be held from 11:00 AM-12:00 PM with a Mass of Christian Burial following at 12:00 PM.  Interment will follow at the Biloxi National Cemetery in Biloxi, MS.

Bradford-O’Keefe Funeral Home is honored to serve the family of Norman Bela Nyary.

To order memorial trees or send flowers to the family in memory of Norman Bela Nyary, please visit our flower store.