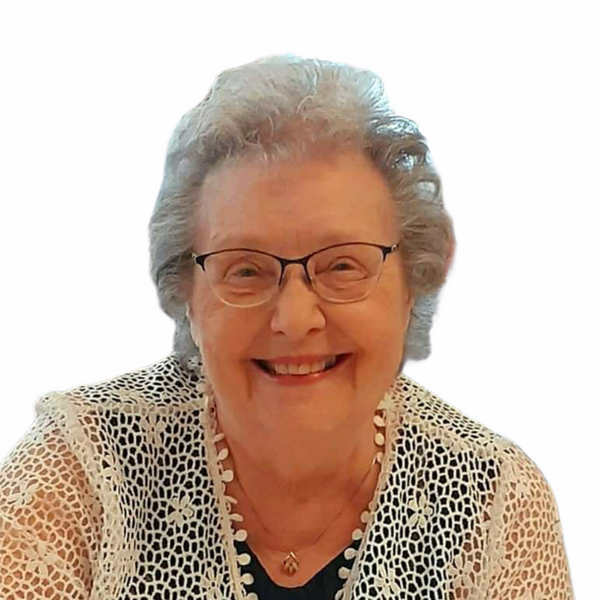 Parmilee Krob, age 86, was called Home to be with her best friend, Jesus Christ, on October 3, 2021. She was surrounded by her family. Her life was well lived in serving her Lord and savior Jesus Christ. Parmilee was born in Norfolk, VA, to Fred and Mattie Edwards on October 11, 1934. Parmilee married Marlyn C. Krob on December 19, 1952. In 1954, Parmilee and Marlyn moved to Valley Forge, PA, to attend Eastern Bible Institute, now known as University of Valley Forge. After graduation they pastored churches in Maine and Maryland before moving to Tacoma, WA. Over their 66 years of marriage, they moved the family 33 times and traveled the world together for business and ministry. In 1975, the family was transferred to Ocean Springs, Mississippi. Her employment background was in bookkeeping. Upon moving to the gulf coast area, Parmilee was employed by Biloxi Chamber of Commerce and Piltz Williams LaRosa & Co. CPA firm. By 1979, Parmilee and Marlyn purchased the Christian Book Shoppe in Pascagoula, MS. The business grew from one store to three stores across the gulf coast counties. When they retired from the Christian Book Shoppe in 1994 it was the largest privately owned bookstore in Mississippi. After retiring from the Christian Book Shoppe, Parmilee and Marlyn served various ministries, including Mission America Placement Service (MAPS) and traveled the country in their RV. In 2000, while attending Cedar Lake Christian Assembly of God, they were appointed state directors of Marriage Ministry International that flowed into the developing Couples Discovery Weekends. Hundreds of couples were ministered to by teams of faithful workers and prayer warriors. One Flesh Ministry began ministering to couples one-on-one. They took their marriage ministry program to the New England states, the Carolinas, Uganda, Africa, and Mexico. It was a wonderful time of fruitful ministry. From 2011 until June 2019, Parmilee lovingly cared for Marlyn as he developed and journeyed through the stages of Dementia. She loved and ministered to her husband as she returned to providing bookkeeping services. Her clients included Mercy House of Hurley, MS; Three Rivers Assembly of God of Moss Point, MS; JW Webb State Farm, Ocean Springs, MS; and Teen Challenge of Mississippi, Poplarville, MS. It has been a full life, well lived, and with no regrets. Parmilee was preceded in death by her husband, Marlyn Charles Krob of Ocean Springs, MS; her parents, Fred and Mattie Edwards of South Norfolk, VA; her sisters, Margaret Beiler of Virginia Beach, VA, and Maybelline Holland Lester of Suffolk, VA; and four great-grandchildren, Eli Bates, Boston Bates, Amelia Coroy and Zoe Seymour. She is survived by her sister, Barbara Johnson of Chesapeake, VA; four children: Karen (Robert) Hicks of Humansville, MO, Barbara (Jerry) Seymour of Cumming, GA, Marla (John) Coroy of Ocean Springs, MS, and Jeff (Kathy) Krob of Snow Hill, MD; eight grandchildren, Michelle (Mike) Bates of Humansville, MO, Amanda (Craig) Bellisario of Rochdale, MA, Jonathan (Mandy) Seymour of Greer, SC, USAF Major Ryan (Katie) Seymour of Pinehurst, NC, Michael (Amanda) Coroy of Vancleave, MS, David (Chi) Coroy of Biloxi, MS, Matthew Brooks of Snow Hill, MD and Melissa Brooks of Bear, DE; eleven great-grandchildren; and numerous nieces and nephews. She was faithful to her Lord, her husband, and her family. Her godly example and genuine love will be deeply missed. Visitation and service are open to all friends and family. Visitation will be held at Bradford O’Keefe Funeral Home, Ocean Springs, MS, from 10 o’clock to 11 o’clock on Wednesday, October 6, 2021, Celebration of Life service will immediately follow. Interment will be at Biloxi National Cemetery, Biloxi, MS. The Ocean Springs Chapel of Bradford-O’Keefe Funeral Home is honored to serve the Krob family. For those desiring, in lieu of flowers, memorials may be made to Teen Challenge of Mississippi where Parmilee served as bookkeeper for over 20 years. Mail donations to P. O. Box 188, Poplarville, MS 39470, please mark them as Freedom Funds. Thank you.
To order memorial trees or send flowers to the family in memory of Parmilee Krob, please visit our flower store.
Send a Sympathy Card