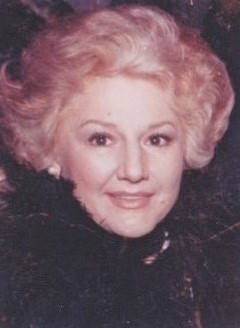 Peggy E. Winfree passed away in the arms of her Savior and His Mother Mary on April 23, 2022, at her residence in Biloxi.

She was born and lived most of her life in Ocean Springs, the daughter of Alma and Don Y. Eglin.  She had two sisters, Bettie E. Fallo and Donna E. Burch, both of Ocean Springs.

When a child, her family moved to Biloxi, where she attended Sacred Heart Academy, making her first Holy Communion at Nativity BVM Cathedral. After the illness and death of his father, Mr. Eglin and his family returned to Ocean Springs to take over Eglin’s Grocery and Market on Washington Ave. Peggy graduated from Ocean Springs High School and was always active in school activities; she was a cheerleader in her senior year and was voted Best All-Around Girl four years in a row. She also played the lead in the senior play and served on the staff of the yearbook.  She received four scholarship awards to different schools and universities.

Following graduation, she worked as secretary to A.P. Shoemaker, general manager of Edgewater Gulf Hotel. She married Malcolm F. Hodges and lived in Ocean Springs; they had two children, Vicki and Mal.

With her second husband, Dr. Cecil Guyton, she gave birth to another son, Ernie.  They moved to Fort Bayou in Gulf Hills, also called sunset point.  She shared her home through active memberships in groups such as the Gulf Hills Garden Club, where she was lauded with awards for her arrangements, including the coveted Tri-color Award for Best in Show.

She played bridge and golf, and was elected president of the Gulf Hills Golf and Social Club. After winning golf tournaments there, she left the golfing world to spend more time with her children.

Peggy is survived by her husband, Martin Winfree of Biloxi; her children, Malcolm F. Hodges, Jr. (Keith Poole) of Riverdale, Ga., Victoria Hodges Guyton of Sharpsburg, Ga., and W. Ernest Guyton (Priscilla Dodds) of Roswell, Ga. She is also survived by many beloved nieces and nephews from the Burch, Fallo and Ryan-Senseney families.

A Mass of Christian Burial will be held at 11:00 a.m. on Thursday, April 28, at St. Alphonsus Catholic Church, 504 Jackson Ave., Ocean Springs. Friends may visit one hour prior. Burial will follow at Crestlawn Memorial Park. Bradford-O’Keefe Funeral Home, Ocean Springs is honored to serve the family of Mrs. Peggy Winfree.
To order memorial trees or send flowers to the family in memory of Peggy Eglin Winfree, please visit our flower store.