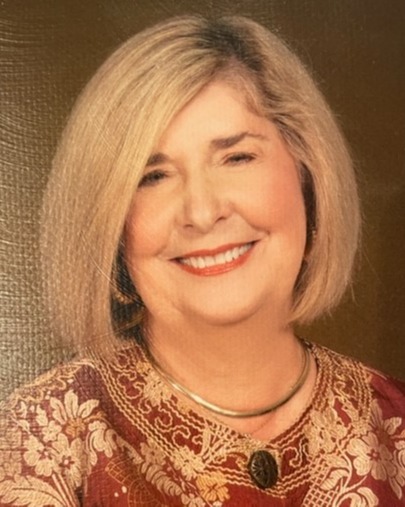 Sue Barrett Waller of Gulfport, Mississippi passed away peacefully on November 14, on her 84th birthday, while surrounded by her husband and children.

Sue was born on November 14, 1938 to Myra White Barrett and Jerald Lanoid Barrett in Wetumpka, Alabama. After graduating as valedictorian of Auburn High School’s class of 1956, Sue continued her education at Auburn University. She was a member of Chi Omega sorority and served in the student government association, graduating with a degree in Secretarial Administration in 1960.

In 1960, Sue was approached by a cute guy at a bowling alley that she had known at Auburn - Thurman Cleveland “TC” Waller, Jr. in Montgomery, Alabama and they were married on June 9, 1962. Sue and TC went on to have two children, Suanne Waller Samelson and Douglas Steven Waller.

Sue starred as the Romper Room Host for a Florida PBS show in 1972, served as the school secretary for Parents Cooperative School in Jiddah, Saudi Arabia, and was the office administrator for NOAA at Stennis Space center in 1980. After helping her husband run Southern Construction & Engineering, she founded Landmark Contracting in 1985. She served as a national officer for Women Construction Owners and Executives (WCOE) and was named as a top ten business in the Mississippi.

Sue served her church community over the years as a pianist, organist, choir director, and preschool teacher. She utilized her musical talent by playing piano and organ in her  church services that were held secretively while living in Saudi Arabia from 1975-1977. While the Waller family traveled the world, Sue would never be without a jar of peanut butter and a sleeve of crackers in her purse for her children. While her children were young, Sue and TC competed regularly in tennis country club tournaments.

In retirement, Sue was known for her love of music, holidays, shopping, the Sandestin beach, and Auburn football. There was rarely a day without Sue’s wit and sarcasm causing everyone around her to laugh. Sue was known as a loving wife, devoted mother, doting “Grandmother” and “Gigi”, and a loyal friend. Her love of family and Christ kept her joyful throughout the last years of her life.

A memorial service will be held Friday, November 18, 2022 at 1:30 p.m. at the First Baptist Church of Biloxi where friends may visit beginning at 12:30 p.m.  There will be a private interment following the service.

To order memorial trees or send flowers to the family in memory of Sue Barrett Waller, please visit our flower store.