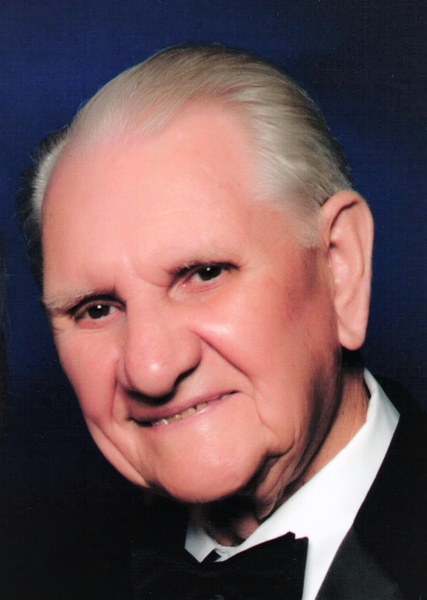 Tom was a former resident of Roanoke and Norfolk, VA and had been a resident of Pass Christian since 1966.

Major Thomas Dewey Adams, Jr. was born in 1921 in Radford, VA, raised in Roanoke, VA and graduated in 1939 from Jefferson Senior High School.  He worked part time at Roanoke Airport for flying instructors and made his solo flight in the summer of 1938.  After high school, he was employed at the Aircraft Repair Facility, Naval Air Station, Norfolk, VA.   Major Adams enlisted in the Army Air Corps in August 1941, and was trained as an aircraft mechanic at Keesler Field, Biloxi, MS.  He was a member of the first class at Keesler.  After completion, he was assigned duty as an instructor at Gulfport Army Air Field.

In 1943, then Sergeant Adams met Esther Saucier and they were married June 30, 1943 at St. John’s Catholic Church in Gulfport.

Major Adams served 25 years in the Army Air Corps and US Air Force.   As a B-29 Flight Engineer, he and his crew flew 26 bombing missions against Japan in 1945 and also served as a maintenance supervisor in an F-51 fighter squadron at Clark Field, Philippines.  His unit was sent to Korea when the war started in 1950 as a maintenance officer of F-100 fighter squadrons from Louisiana.  His unit went to Turkey during the Cuban Missile Crisis in 1962.  In 1965, he went to Vietnam with the same F-100 fighter squadron.

During the Cold War years, Major Adams served ten years in the Air Defense Command as Maintenance Office of Interceptor Fighter Squadrons including three years in Newfoundland from 1957-60.  The last 6 years of active duty he was maintenance control officer of the 401st Tactical Fighter Wing’s four F-100 fighter squadrons and support units.  He was awarded the Air Force Commendation Medal for his service.

Major Adams’ awards and decorations included the Distinguished Flying Cross (DFC), 3 Air Medals and 13 Unit, Service, Campaigns and Battle Awards. His B-29 crew are members of the Caterpillar Club.  They made an emergency parachute jump at Iwo Jima Island on May 14, 1945.

Major Adams was promoted through the ranks during World War II and in 1945 he was promoted to rank of Flight Officer.  After the war, he was commissioned in 1946 as a Second Lieutenant in the Army Air Corps Reserves and WOJG/W4 in 1951 and on retirement from active duty he was on the promotion list for Major in the Air Force Reserve.

Adams got out of the military in 1946 for a very short period of time but missed military life so much he rejoined and was assigned to the Manhattan Project, flying test missions for the “A” bomb.  Other assignments included a return to Keesler as the supervisor of the aircraft mechanic school followed by multiple tours as a maintenance technical officer/inspector in Korea, the Philippines, Lovelace Field in Maryland and England AFB in Louisiana.

For 20 years following his retirement from the Air Force in 1966, he again followed his love of flying by working for NASA support contractors at Stennis Space Center as a planner and scheduler for engineering of the high pressure gas components involved in the Shuttle Engines Test Program.  He received NASA citations for his work in the shuttle program.

He was a member of DeMolay, American Legion, Veterans of Foreign Wars, Air Force Retired Officers Association, and MS Gulf Coast Air Force Retired Officers Association.  After he retired from Stennis in 1986, he and his family moved to Pass Christian where they became very involved in the St. Paul’s Carnival Association.  As members of the Stewart-Peralta family float, it was a special time every year building, decorating and riding in the Pass Parade.  In 2015, one year after his move to the Armed Forces Retirement Home in Gulfport, he was honored by being selected as king of the parade and ball.

He was preceded in death by his wife of 67 years, Esther Saucier Adams; his parents, Dewey and Margaret Adams; a daughter, Tina Marie Adams; and his brothers, Glenn and Gene and their wives.

The Mass of Christian Burial will be held at 10:30 a.m. Monday, August 1, 2022 at Holy Family Catholic Church, Pass Christian, MS where friends may visit one hour before the mass.  Interment will follow at Biloxi National Cemetery with military honors by the US Air Force.

To order memorial trees or send flowers to the family in memory of Thomas Dewey Adams, Jr., please visit our flower store.

Military Honors by the US Air Force